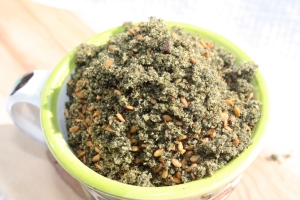 za’atar
Za’atar is a traditional Palestinian mix of dried thyme, sesame seeds, sumac and salt. It is traditionally made by women of the household and is still produced today by women’s cooperatives. The best zata’ar is made using wild thyme found in the hills of Palestine. Thyme is a powerful antioxidant and an aid to digestion, helping to fight off cold and flu, while sesame seeds area good source of calcium making it good for bone health.
Use: for dipping bread and crackers into with oil, mixing with oil for pizza toppings, sprinkle on salads, garnish hummus, baba ghanoush and labaneh and cheese, mix into bread mized and baked goods, use to marinade chicken and flavour tempeh or tofu.

sumac
the name comes from the Syriac and Arabic word for red, as this spice is a bright and vibrant red. It is usually foraged from wild sumac plants and it popular in Palestinian and Middle Eastern food. It has a slightly zingy lemonly flavour, and works well with many foods. It is renowned for its anti-fungal, anti-microbial, anti-inflammatory and antioxidant values.
Use: to garnish hummus, baba ghanoush, labaneh, dips and cheeses, use as a dressing on salads, or to marinade chicken and meat.

tahini
Tahini is essential in every Middle Eastern Kitchen. It is the paste of ground sesame seeds. You can get light coloured tahini, which is made from hulled sesame seeds which is quite sweet or darker tahini which is made from the whole sesame pre-hulling., which is a lovely deep, nutty flavour. Tahini is a good source of omega-3 and omega-6 , it’s a richer protein source than most nuts with high amounts of vitamin E, B1, B2, B3, B5 and B15, promoting healthy skin, muscles and bones.
Use: Tahini is a crucial ingredient for hummus, baba ghanoush, and badoonsia, you can also use it to make protein balls, salad dressings and puddings.

olives
Olives are native to the Mediterranean basin, with thousands of people in Spain, Greece, Italy and Palestine still wholly reliant on them for their livelihoods. They come in many varieties, colours and are preserved in many different way, all of which are delicious. Olives are rich in vitamin E, selenium and zinc, making it a powerful and effective antioxidant. The array of phytonutrients also makes them great ant-inflammatory foods.
Use: eat them on their own as a snack or with a variety of other nibbles, add to sauces, pastas, casseroles, salads and tarts.

The very best extra virgin olive oil comes from Palestine. Abundant in October and November after the harvest, freshly pressed olive oil has a wonderful sharp zest and becomes more mellow as its allowed to sit and rest.  At one time most Palestinian  families had land with olive trees on it and many still have their own trees to make their own family supply each year.

use: on and in and with everything.  to marinade and cook meats and vegetables, poured over salads and dips like hummus and baba ghanoush and labna.

Burghul is cracked wheat.  You can buy it fine or course and both have different uses in the kitchen, but you can basically interchange them.

use: make like a rice or add to salads.  Essential for dishes like Tabbouleh, kubbeh and mujjadara.

Freekah is simply wheat, but not like you have ever tasted it.  while the wheat is still young, it is harvested and while still in its husk it in tossed through fire to give it a delicious smoky flavour.  Freekah was traditionally used in many Palestinian dishes like Maqlooba before the ottomans introduces rice to the region.

use: cooked in place of rice, in soups and stuffed into chicken.